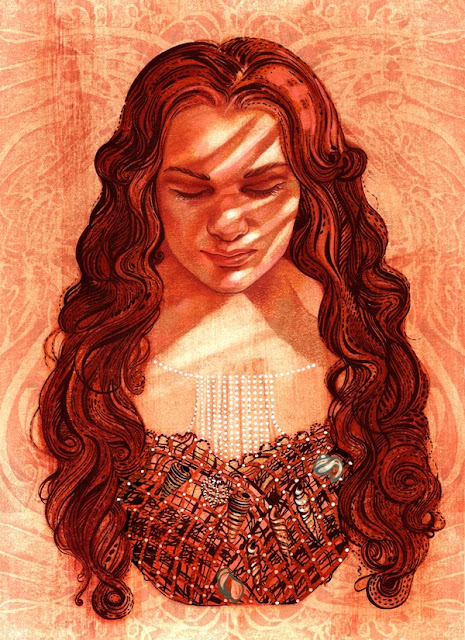 The subject of the portrait is Aslaug, the reported daughter of Sigurd and the shieldmaiden Brynhildr, from Norse Mythology. The shadow of a wing falls across her visage to imply her moniker, Kråka (‘Crow’), given to her by a pair of peasants who discovered her orphaned and stolen away in a harp. They hid her beauty--a trait of nobility--by rubbing her in tar and adorning her shoulders in a long cape.

Aslaug's dress of layered netting and shells refers to her battle of wits with the legendary Viking Ragnar Lodbrok, in which he challenges her to meet him “neither dressed nor undressed, hungry nor full and alone nor in company.” She arrives dressed in a net, biting an onion and with only a dog as a companion. Impressed by her ingenuity, Ragnar proposes marriage to her.

Available as a print at Canzine: Festival of Zines and Underground Culture--Sunday, October 20, 2013

"I'm Jojen Reed, this is my sister Meera. We've come a long way to find you, Brandon and we have much farther to go."

Jojen and Meera Reed are the children of Howland Reed, Lord of Greywater Watch and loyal vassal of House Stark. Jojen was bestowed with greensight, the power of prophetic dreams, after being visited by the Three-eyed Raven in a near death experience. The velvet-voiced Thomas Brodie Sangster portrays the wiser-than-his-years Jojen to perfection on HBO's Game of Thrones, and as her brother's protector, Ellie Kendrick adds charm to Meera Reed. 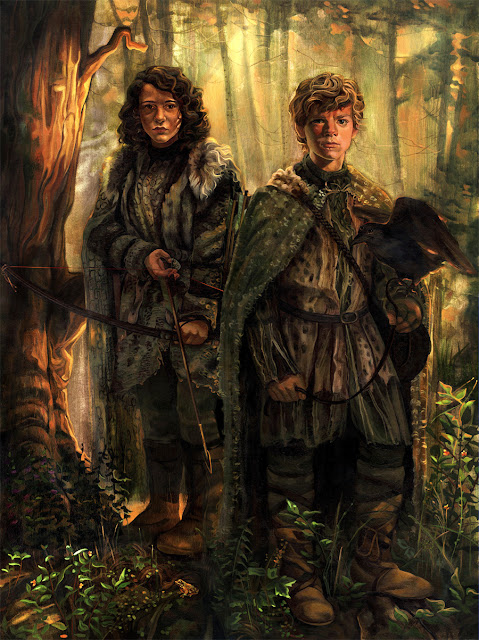 Posted by Danielle at 6:09 PM No comments:

A Man Has Said

“The Red God takes what is his, lovely girl. And only death may pay for life. You saved me and the two I was with. You stole three deaths from the Red God. We have to give them back. Speak three names and the man will do the rest. Three lives I will give you - no more, no less, and we're done.”

George R.R. Martin, 'A Song of Ice and Fire: A Clash of Kings' 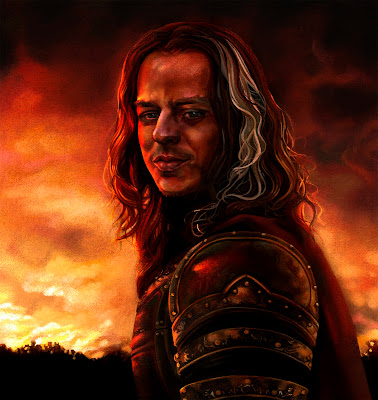 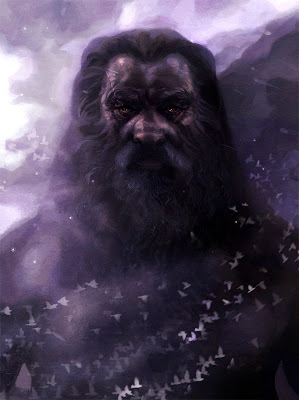 “He is a skin-changer. He changes his skin: sometimes he is a huge black bear, sometimes he is a great strong black-haired man with huge arms and a great beard…Some say that he is a bear descended from the great and ancient bears of the mountains that lived there before the giants came. Others say he is a man descended from the first men who lived before Smaug or the other dragons came into this part of the world, and before goblins came into the hills out of the North. I cannot say, though I fancy the last is the true tale… I once saw him sitting all alone on the top of the Carrock at night watching the moon sinking towards the Misty Mountains, and I heard him growl in the tongue of bears: ‘The day will come when they will perish and I shall go back!’ That is why I believe he once came from the mountains himself”

The imagery conjured by this passage has remained with me for nearly a year and a half. Countless projects have seen completion before this one, but ‘Beorn’ preceded them as a nearly polished idea in my subconscious. Despite its simplicity, illustrating the transfiguration of Beorn into a black bear was immensely challenging. The ambiguity of this ‘in-between’ stage was compensated for by fog and light. Intending for this to be more than portrait, I knew I had to introduce a conceptual element. I capitalized on the shapeshifter’s affinity for animals by encircling his body in an ethereal current made up of birds. Although Beorn had a particular love of bees, they didn’t translate as well from a visual standpoint.

As this was an experiment of traditional and digital means of picture-making, constructive criticism is much appreciated :D

I am mightily excited for Swedish actor Mikael Persbrant's portrayal of Beorn in the second installment of Peter Jackson's The Hobbit trilogy, The Desolation of Smaug. Although I did not take visual cues from Persbrant in this portrait, the duality of his facial expressions recall the kindness and ferocity of a bear. Excellent casting choice.
Posted by Danielle at 10:51 AM 1 comment:

A birthday gift inspired by Disney’s animated film, ‘Brave’ for one of my closest friends. The painting borrows from a scene where and her bewitched mother are taking shelter in a dark grove. While the other slumbers, lies awake in guilt and recalls happier times with her mother during childhood.

The lack of reference used in the overall painting distanced me from my traditional realism and brought out a whimsical quality that I might not have otherwise achieved. I’ll admit to avoiding moonlit environments where possible because of the change in visual perception. According to a recent scientific hypothesis, moonlight is not blue, but slightly redder than the average colour of direct sunlight. There is nothing in the interaction between the sun’s reflection on the surface of the moon to suggest the colour blue. Although the colour-receptive rods in the human eye are incapacitated by moonlight, scientific instruments have shown them to be most sensitive to greenish wavelengths of light. As a result, blue-green hues appear lighter in tone in dim conditions. The phenomenon is identified as the Purkinje Shift. It is different from, and often mistaken for, the perception of moonlight as blue. Despite adhering to the Purkinje Shift in my painting, ’s hair is still a fiery and brilliant red :) 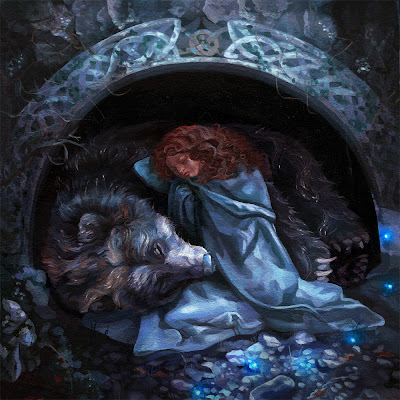 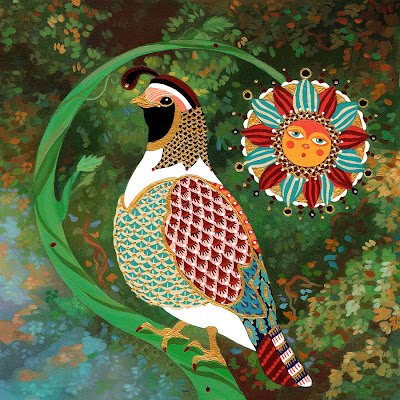 Each year at the Toronto Outdoor Art Exhibition, artists voluntarily donate a 6” x 6” unique artwork to support the exhibition’s fundraising effort, Art Squares. I chose to create an illustration inspired by Foster the People’s uplifting concert at on . Tuesday evening’s performance, featuring Foster the People and local openers Tokyo Police Club, went ahead despite a tragic stage collapse that occurred before a scheduled Radiohead concert the preceding weekend. I recall merging with the migrating crowd on a long stretch of road toward The Meadow when the wreckage came into view. An aura of sombreness and foreboding hovered over us all until greeted by the up-tempo beats, captivating lyrics and impressive light show of the concert’s double feature. Midway through Foster the People’s set, Mark Foster paid a touching tribute to the late Scott Johnson, a casualty of Saturday’s incident. “We make music to bring joy to people” Foster said poignantly as he went on to describe the bonds of friendship shared between a band and its crew members while touring. Foster the People and musical guest Kimbra continued their celebration of life in grand fashion and proved yet again that music is integral to the healing process.

Foster the People formed in and carry many Californian sensibilities. Accordingly, my decorative painting features the state’s national bird, The California Quail. The quail is widespread and appears in the mythology and legends of numerous cultures as a symbol for a contrite spirit, communal love, victory and the hunt. I always found it quite humorous that their call sounds as though it were exclaiming, “Run, Run Run” or “The man is coming, the man is coming!”.

The expressive anthropomorphic flower gestures at the animated sun the band featured in their main act. The mood of the piece was made to reflect the positive vibes the band’s music exudes.

The weeks heralding our Grad Show on April 19 and 20 were charged with heavy emotion and anticipation. Late nights and early mornings were interchangeably spent finishing artwork and essays, conducting self-promotion initiatives and getting our grad show display underway. We survived the endurance test on our souls and creativity by encouraging one another and never losing sight of our goals. Thank you to everyone who has journeyed with me through these past four years :). You are exceptionally talented and wonderful people. I offer my heartfelt congratulations to all. Above all, I must acknowledge those professors who underwent much toil in preparing the graduate classes and coordinating the setup for our final exhibition.

The layout of my final display board and accordion on corner table. 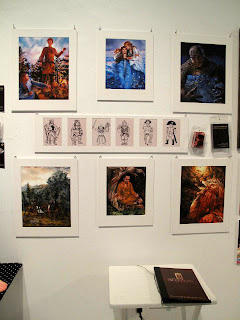 Family and friends on the first official night of our Grad Show. 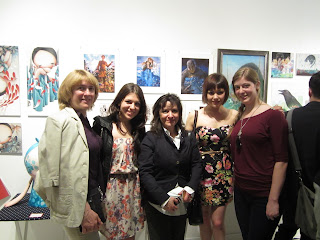 Posted by Danielle at 9:36 AM No comments: